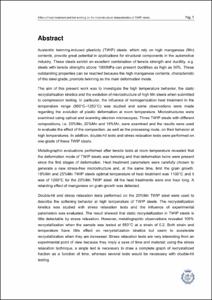 Except where otherwise noted, content on this work is licensed under a Creative Commons license : Attribution-NonCommercial-NoDerivs 3.0 Spain
Abstract
Austenitic twinning-induced plasticity (TWIP) steels, which rely on high manganese (Mn) contents, provide great potential in applications for structural components in the automotive industry. These steels exhibit an excellent combination of tensile strength and ductility, e.g. steels with tensile strengths above 1000MPa can present ductilities as high as 50%. These outstanding properties can be reached because the high manganese contents, characteristic of this steel grade, promote twinning as the main deformation mode. The aim of this present work was to investigate the high temperature behavior, the static recrystallisation kinetics and the evolution of microstructure of high Mn steels when submitted to compression testing. In particular, the influence of homogenization heat treatment in the temperature range (950°C–1250°C) was studied and some observations were made regarding the evolution of plastic deformation at room temperature. Microstructures were examined using optical and scanning electron microscopes. Three TWIP steels with different compositions, i.e. 25%Mn, 20%Mn and 18%Mn, were examined and the results were used to evaluate the effect of the composition, as well as the processing route, on their behavior at high temperatures. In addition, double-hit tests and stress relaxation tests were performed on one grade of these TWIP steels. Metallographic evaluations performed after tensile tests at room temperature revealed that the deformation mode of TWIP steels was twinning and that deformation twins were present since the first stages of deformation. Heat treatment parameters were carefully chosen to generate a new stress-free microstructure and, at the same time, limit the grain growth. 18%Mn and 25%Mn TWIP steels optimal temperature of heat treatment was 1100°C and it was of 1200°C for the 20%Mn TWIP steel. All the heat treatments were one hour long. A retarding effect of manganese on grain growth was detected. Double-hit and stress relaxation tests performed on the 20%Mn TWIP steel were used to describe the softening behavior at high temperature of TWIP steels. The recrystallization kinetics was studied with stress relaxation tests and the influence of experimental parameters was evaluated. The result showed that static recrystallization in TWIP steels is little detectable by stress relaxation. However, metallographic observations revealed 100% recrystallization when the sample was tested at 950°C at a strain of 0.2. Both strain and temperature have little effect on recrystallization kinetics but seem to accelerate recrystallization when they are increased. Stress relaxation tests are very interesting from an experimental point of view because they imply a save of time and material; using the stress relaxation technique, a single test is necessary to draw a complete graph of recrystallized fraction as a function of time, whereas several tests would be necessary with double-hit testing.
SubjectsAustenitic steel, Steel -- Heat treatment, Steel, High strength, Acer austenític, Acer -- Tractament tèrmic, Acer d'alta resistència
DegreeMOBILITAT INCOMING
URIhttp://hdl.handle.net/2099.1/13156
Collections
Share: