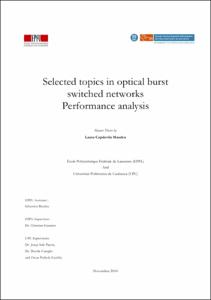 CovenanteeÉcole polytechnique fédérale de Lausanne
Document typeMaster thesis (pre-Bologna period)
Rights accessOpen Access
Abstract
English: This report is the result of the final year project carried out at the Laboratoire des telecommunications (TCOM), École Polytechnique Fédérale de Lausanne (EPFL) between March and October 2010 under the supervision of Dr. Christian Gaumier and the assistance of Sébastien Rumley. The work presented in this thesis is based on the JAVOBS simulator, which was presented for Oscar Pedrola in [31]. This OBS network simulator has been built on top of the JAVANCO framework developed for Sébastien Rumley and other collaborators in TCOM laboratory. The report starts presenting the basics of OBS paradigm in order to situate the lector in context and to present the operation possibilities of OBS networks and its problem of burst contention. It continues in chapter 2 with the explanation of network modeling and specifically for the particular model of JAVOBS. In the different sections in chapter 3, the selected topics are presented and treated in detail. Each section of chapter 3 is divided in a presentation of the topic and the reason why it is interesting to work on it, the necessary implementation to introduce it in the Javobs tool, some simulation tests to validate and check the correct functionality of the component developed and some results and conclusions by simulation comparison. Mainly, the selected topics are the following: ‐ The routing topic is treated with the purpose to define a proactive routing protocol based on load balanced-algorithm which operates as a contention resolution technique. ‐ The virtual topology design is treated in order to also alleviate and reduce the contention problem by the establishment of a particular set of dedicated lightpaths on the physical network. ‐ To provide new models of traffic for JAVOBS simulator, the traffic generation topic is raised. Traffic characteristics and self-similar properties are presented and a Markov-modulated traffic generator and a Self-Similar traffic generator are implemented and validated. Then, its impact in the network performance is evaluated and compared.
Description
Projecte final de carrera realitzat en col.laboració amb École Polytechnique Fédérale de Lausanne (EPFL)
SubjectsComputer networks, Ordinadors, Xarxes d'
URIhttp://hdl.handle.net/2099.1/13140
Collections
Share: