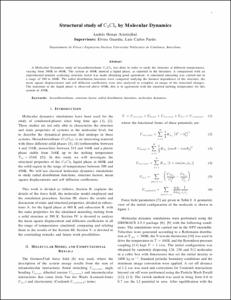 Document typeMaster thesis
Rights accessOpen Access
Abstract
English: A Molecular Dynamics study of hexachloroethane C2Cl6 was done in order to study the structure at different temperatures, varying from 300K to 480K. The system at 480K showed a liquid phase, as reported in the literature. A comparison with an experimental neutron scattering structure factor was made obtaining good agreement. A simulated annealing was carried out in a range of 300 to 480K. The radial distribution functions were compared studying the thermal dependence of the structure, the mean square displacements and self diffusion coefficients were also analyzed to complete an image of the structural changes. The transition to the liquid phase is observed above 450K, this is in agreement with the reported melting temperature for this system of 458K.
SubjectsDinàmica molecular, Física nuclear
URIhttp://hdl.handle.net/2099.1/13139
Collections
Share: