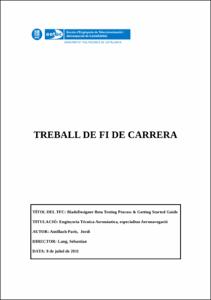 This essay represent the culminating point of the work carried on by students of TUM university that during the last 3 years have initiated a development process to create a CAD tool to design compressors for aeronautical compressors to use in aircraft engines. The main objective of this project was to perform a Beta testing process on the software in order to elaborate a release to public viability report. This process had to take into account all functions integrated in the program as well as the interface created to communicate with the user. Additionally it was deemed necessary to create a getting started guide for new user to complement the documentation attached to the program. The testing method used was based on black box tests. Using already known 3D models and recreating them with BladeDesigner to compare them and then establish which functions of the program induced errors to the process or defects in the models generated. The creation of the guide has almost been a result of the learning process needed to understand the program to test it. Through the acknowledgement of functionalities and supported by the documentation provided by other team members I've documented every step taken into the program as well as a thorough definition of the interface elements summarizing them in a step by step guide. Unfortunately the final conclusion points out that the program is not ready for public release. The geometry building functions integrated in the interface are incomplete and the secondary functions introduce errors to the building process and destabilize the proper functionality of the program. Nevertheless this conclusion was expected as this was the first time that BladeDesigner underwent a testing process and the expected result was to find these bugs which will have to be corrected later.
SubjectsAeronautics, Compressors, Aeronàutica, Compressors -- Aerodinàmica
URIhttp://hdl.handle.net/2099.1/12946