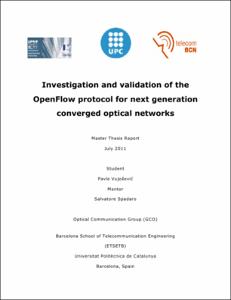 Except where otherwise noted, content on this work is licensed under a Creative Commons license : Attribution-NonCommercial-NoDerivs 3.0 Spain
Abstract
English: Considering the extension to the circuit switching environment, the work describes abilities of converged packet and circuit networks such as: dynamic packet link establishing, application-aware traffic aggregation and service specific routing. In addition to this, the overlay architecture for interoperability of GMPLS and OpenFlow has been suggested and FlowVisor capabilities in virtualization of optical networks have been investigated. At the end, the architecture of a real OpenFlow network comprising OpenFlow packet switches, FlowVisor and NOX controllers has been described, emphasizing detours from the theoretical architecture due to financial considerations.
SubjectsComputer network protocols, Optical communications, Protocols de xarxes d'ordinadors, Comunicacions òptiques
URIhttp://hdl.handle.net/2099.1/12760
Collections
Share: