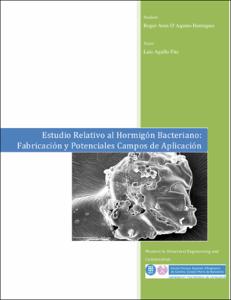 Except where otherwise noted, content on this work is licensed under a Creative Commons license : Attribution-NonCommercial-NoDerivs 3.0 Spain
Abstract
Portland cement a binder material, is one of the most widely used materials in the construction industry. As it is cheap, diverse, with excellent material properties and can be adopted for many application processes and forms. In nature there also exist various processes that cause and can induce cementation, and consolidation of particles. In recent years attempts have been made to study, and adopt suitable processes that could cause biocementation. The most promising of them is the use of ureolytic bacteria, as they are widely available in the soil and natural environment, can be easily controlled and have the ability to produce cementation at comparatively much faster rate. The ureolytic bacteria, hydrolyse urea to produce carbonate ions and in the presence of free calcium ions precipitate calcium carbonate. If the saturation levels of the calcium carbonate produced are sufficiently high, it will precipitate forming bonds and consolidating its surroundings. For the bioconcrete to have comparable strengths to that of Portland cement. High amounts of calcium carbonate precipitation are needed, to produce high compressive strength. The strength formation is also linked to other factors like quantity of bacteria, dry density and urease activity. Hence an indepth understanding of the bacteria, growth conditions, cementation materials and application process is needed. This thesis looks into the formation of a concise data base of the materials used in biocementation, their effects and concentrations. The process of biocementation exists in two stages: growth of bacteria and biocementation. The biocementation stage is further divided into the bacterial injection phase and cementation phase, which are independent of each other. Based on the information gathered and analysed, processes for biocementation are proposed and further studied. In this study it has been concluded that by adapting the process for the formation of bioconcrete for use in the precast industry where strengths greater than 20Mpa can be achieved. And that scope for research and further gains in strength is possible. The material properties and potential defects that could arise have also been reviewed in this thesis. Also proposals for improvements and precautionary measures have been established.
SubjectsConcrete construction, Portland cement, Construccions de formigó, Ciment pòrtland
DegreeMÀSTER UNIVERSITARI EN ENGINYERIA ESTRUCTURAL I DE LA CONSTRUCCIÓ (Pla 2009)
URIhttp://hdl.handle.net/2099.1/12704
Collections
Share: