Integration of Multidimensional and ETL design 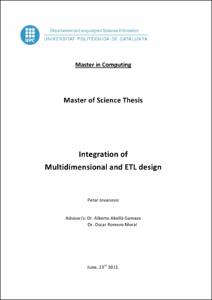 Document typeMaster thesis
Rights accessOpen Access
Abstract
This project represents master thesis and the final project, on the Master in Computing program, at Technical University of Catalonia. Led by the motivations and goals previously expressed, this project consists of the following: - Theoretical part. This part represents the research in the field of automating and customization of multidimensional and ETL designs. It also includes exploration of the previous attempts in building a system which would lead system designers during the process of the ETL design, and Technological part. This part includes the realization of the initial stages of the GEM framework. Besides implementation of these stages, technological part of the thesis also includes complete integration of the initial stages with the other, already implemented stages of GEM, i.e., Multidimesional Validation (MDBE) and Operation Identification (ETL generation), into the whole framework. These stages have been developed by professor Oscar Romero and Daniel Gil Gonzalez respectively.
SubjectsRelational date bases, SQL (Computer program language), Bases de dades relacionals, SQL (Llenguatge de programació)
URIhttp://hdl.handle.net/2099.1/12690
Collections
Share: