Morphological variability of embayed beaches along the catalan coast 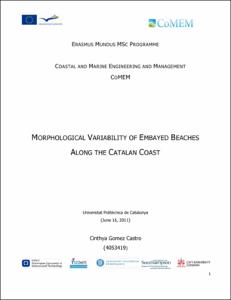 Except where otherwise noted, content on this work is licensed under a Creative Commons license : Attribution-NonCommercial-NoDerivs 3.0 Spain
Abstract
Natural and man made embayment beaches are a common feature along the Catalan coast. Many of these embayment beaches have experience changes in shoreline position jeopardizing the protective and recreational functions of the beach. Therefore, an understanding of the morphological variability of this system is needed in order to facilitate an effective and sustainable coastal zone management. The present study was undertaken with the objectives of: 1) study the shoreline evolution of the Catalan coast, 2) determine medium term oscillation and the forcing mechanisms governing this process by means of a theoretical model and 3) evaluate the frequency of the theoretical model using the last 7 years of wave data. Data from nine sandy beaches along the Catalan coast consisted on previously define digitalized coastlines from the Environmental Ministry, the Cartographic Institute of Catalonia and satellite images from Google Earth. Results from the shoreline evolution showed that the embayed beaches of Catalonia presented a stable behavior, beaches with the same morphology followed a same trend in the stability test propose by Hsu, 1989. The results of beach mobility showed a non-uniform behavior of the sub-aerial beach width within a beach and along the Catalonian coast. The mayor difference between beaches was due to the orientation of the shoreline, the beach type and the exposure to wave conditions. Embayed beaches also exhibited a wide degree of beach rotation. Beaches with similar morphology show similar degrees of rotation. A theoretical model of the main configurations observed during the study period has been developed for each beach. Results showed that exposed beaches presented an anticlockwise, quasi-uniform and clockwise configuration, while semi-exposed beaches only show a higher anticlockwise and a lower anticlockwise configuration. In the analysis of wave forces on the embayment, it has been observed that wave direction was the primary forcing mechanism that generated changes in beach configuration (e.g. beach rotation), however the combination of wave height, period and direction where the responsible of the response time of the beach to a new configuration. The percentage of occurrence of the wave climate during 2001 to 2007 suggested that some beaches have tendency towards one configuration, in most cases to a higher anticlockwise rotation. Differences between beaches can be attributed to the shelter nature of the beach, the orientation and the effect of the natural or man made headland.
SubjectsCoastal engineering, Beaches, Enginyeria de costes, Platges
DegreeMÀSTER UNIVERSITARI ERASMUS MUNDUS EN ENGINYERIA I GESTIÓ COSTANERA I MARÍTIMA (Pla 2013)
URIhttp://hdl.handle.net/2099.1/12683
Collections
Share: