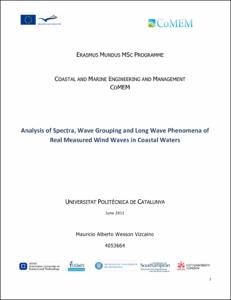 Real coastal waves measured at 4 different locations in the world were analyzed in detail. Long travelled swell measured in the Pacific coast of Costa Rica, wind swell from the Atlantic coast of Costa Rica, short period wind waves from the Ebro Delta in Mediterranean coast of Spain, and waves measured during the passing of Hurricane Wilma near Cancun, Mexico were analyzed. A total of 5795 wave records from the sites above were analyzed. A statistical stability analysis of the wave data was done. The measured wave height distribution was compared with the Raleigh distribution. The corresponding significant wave height and period distribution based on the zero down crossing method was obtained for all the records. The joint individual wave height-period distribution was obtained and the characteristic statistic wave heights and periods were obtained. The time variation of these parameters, including the skewness and kurtosis of the time series were obtained to determine the statistical stability of the data. A detailed spectral analysis using the Fourier transform was done on all the records. The whole record for each location was represented as time variant frequency energy spectrogram. The highest measured record’s spectra for each site were examined in detail. The peakedness, band width, grouping, regularity spectral parameters, and the six principal moments of all the wave records were obtained. The spectra were then compared to the JONSWAP spectrum. Special attention was taken into the non-linear components present in the spectra. Temporal and energetic wave grouping parameters were analyzed using the run length theory. Low frequency modulation was examined against grouping observation. The capability of the variance spectra based on the Fourier transform to describe the measured wave grouping was analyzed and confirmed through the spectral grouping parameter Ka. The long waves present in the records were analyzed using a low pass filter. Spectral analysis was carried out on the filtered time series. The results between the different sites were compared and Longuet-Higgins set down equation under wave groups was calibrated and validated to predict the long wave spectral significant wave height, given the wave spectral significant height, the peak spectral period and the water depth outside the breaker zone. A spectral analysis using the Hilbert Huang method was done to the most energetic measured events of each record. A detail comparison was done between the result of the Fourier transform variance spectral analysis and the Hilbert Huang method. The limitations of the Fourier based spectra and the new Hilbert Huang transform spectra were examined in detail.
SubjectsCoastal engineering, Ocean waves, Analyse Spectrale, Storms, Enginyeria de costes, Onades, Anàlisi espectral -- Enginyeria, Tempestes
URIhttp://hdl.handle.net/2099.1/12682