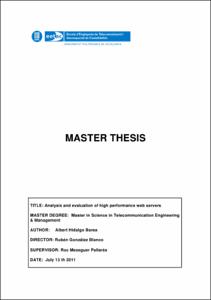 Document typeMaster thesis
Rights accessOpen Access
Abstract
Web servers are a very important tool when providing users with requested content on the Internet. Usage of the Internet is growing day-by-day, making those software applications essential. In the first part of the thesis, the web server world will be introduced to the reader, by giving a brief explanation of some of the available technologies as well as different dynamic protocols. Also, as there are different web servers available in the market, during this report it will be chosen the best performing ones. So, it will be presented a comparative chart between all of them in order to show the most important features of each one. Defining the scenario and the test cases is mandatory. For this reason, it is described the used hardware and software used to perform those benchmarks. The hardware is maintained equal during the whole test process, in order to let web server’s performance gaps to their internal architecture. Operating system and benchmarking tools are also described and given some examples. Furthermore, test cases are chosen to show some strengths and weakness of each web server, enabling us to compare the relative performance between them. Finally, the last part of the report consists on presenting the obtained results during the benchmark process, as well as presenting some lessons learned during the curse of the whole thesis, summing-up with some conclusions.
SubjectsWeb servers, Servidors web
URIhttp://hdl.handle.net/2099.1/12677
Collections
Share: