Water resources management in the Central Rift Valley in Ethiopia 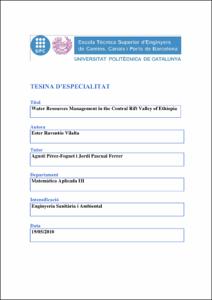 Document typeMinor thesis
Rights accessOpen Access
Abstract
The Ethiopian Central Rift Valley (CRV) is part of the Great African Rift and encompasses four major lakes on the rift floor. It is situated in the administrative regions Oromiya and the Southern Nations Nationalities and Peoples Region (SNNPR), and covers an area of approximately 10,000 km2 [1]. The total population of the CRV is approximately 1.5 million. The natural resources of the area are under enormous pressure due to human influences. The lakes and their influent rivers are used for irrigation, soda abstraction, fish farming, recreation, and also support a wide variety of endemic birds and wild animals [2]. One of the developments in the past decades is the introduction and rapid expansion of irrigated agriculture. Smallholder farmer irrigation schemes as well as large scale private and state farms have been established during the last decades. A recent development is the introduction of foreign investment in closed vegetable and flower production systems [3]. In the pastoral areas, food insecurity is a major problem and a significant proportion of the population rely on relief assistance from external agencies. One of the main causes of poverty in the CRV is the low level of agricultural productivity. The condition of any smallholder irrigation schemes is poor which contributes to inefficient use of water and high irrigation costs [4]. Many irrigation schemes are constructed with governmental or non-governmental support, but operational and maintenance support is often lacking or only partly received [3]. Currently, water is used in the CRV without planning or regulation and without monitoring. The Government of Ethiopia has created policies, strategies, proclamations and development programme to achieve MDGs targets. Each document appears feasible on paper, but constraints in Ethiopia’s water sector have restricted policy success. While there are policies in place that promote efficient utilization of the available water resources, they are not being implemented because of financial and humanpower constraints and problems of stakeholder coordination and participation, among other reasons. The implementation of a Water Point Mapping (WPM) supported by NGOs in the CRV may help in this regard, because in the short term, WPM may serve as a avaluable planning tool for the local level governments.
SubjectsWater resources development, Water-supply, Ethiopia, Recursos hidràulics -- Explotació, Aigua -- Abastament, Etiòpia
DegreeENGINYERIA DE CAMINS, CANALS I PORTS (Pla 1995)
URIhttp://hdl.handle.net/2099.1/12660
Collections
Share: