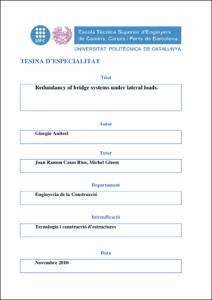 ; Ghosn, Michel
Document typeMinor thesis
Rights accessOpen Access
Abstract
The design of bridges has been traditionally done on a member by member basis and little consideration is provided to the remaining capacity after the failure of one structural element. As a consequence of several tragic collapses that followed the failure of single elements, the evaluation of the structural robustness of bridges has become of primary importance. In this work, a methodology is proposed to for the evaluation of the redundancy and robustness of bridges under lateral loads. The basis of the study is the research conducted under the auspices of the U.S. National Cooperative Highway Research Program (NCHRP) which developed approaches for the redundancy analysis of bridge superstructures and substructures. Generally, engineers have treated these two structural sub-systems separately by uncoupling their response assuming that the connections are due to bearing supports. Recently, the design of integral bridges has become more common especially in seismic hazard zones. In these cases, the bridge has to be analyzed as one monolithic system and a global evaluation of the structural redundancy of the entire system must be performed. The proposed method of analysis, which is based on a static non-linear analysis (pushover) using a finite element 3D space frame model, is applicable for the redundancy analysis of sub-systems connected by bearing supports as well as the entire system with either bearings or integral connections. The proposed analysis accounts for material non-linearity using realistic models for the stress-strain relationships of the different material constituents based on plasticity models that take into consideration the interaction between the axial forces and bending moments when necessary. A lumped plasticity model is adopted. A push over analysis is adopted because it provides an adequate indictor of the post-elastic behavior of the entire system. Load-response curves are hence calculated for the intact structure and for the damaged system, and then compared to evaluate the loss of capacity and safety. The results can be used to analyze the redundancy of existing bridges, give guidelines for robust design, and evaluate the quality of different retrofitting schemes and selecting the best option. In this work the proposed approach is applied to structural systems with increasing levels of complexity. First, the analysis is performed for a simple column, followed by the analysis of a multi-column bent, a retrofitted bent, a scaled bridge model and a full scale bridge. Emphasis is placed on the analysis of the full scale bridge to evaluate the variation of the redundancy indicators in relation to variations of some critical structural and geotechnical parameters including foundation stiffness and deck piers connection assumptions.
SubjectsBridges, Structural analysis (Engineering), Structural engineering -- Safety measures, Ponts, Estructures, Teoria de les, Enginyeria d'estructures -- Mesures de seguretat
DegreeENGINYERIA DE CAMINS, CANALS I PORTS (Pla 1995)
URIhttp://hdl.handle.net/2099.1/12623
Collections
Share: