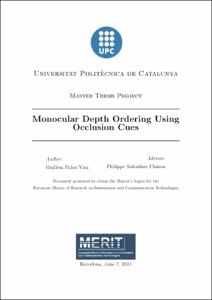 Except where otherwise noted, content on this work is licensed under a Creative Commons license : Attribution-NonCommercial-NoDerivs 3.0 Spain
Abstract
English: This project proposes a system to relate the objects in an image using occlusion cues and arrange them according to depth. The system does not rely on a priori knowledge of the scene structure and focus on detecting special points, such as T-junctions and high convexity regions, to infer the depth relationships between objects in the scene. The system makes extensive use of the Binary Partition Tree (BPT) as the segmentation tool jointly with a new approach for T-junction candidate point estimation. In a BPT approach, as a bottom-up strategy, regions are iteratively merged and grown from pixels until only one region is left. At each step, our system estimates the junction points, where three regions meet. When the BPT is constructed and the pruning is performed, this information is used for depth ordering. Since many images may not have occlusion points formed by junctions, occlusion is also detected by examining convex shapes on region boundaries. Combining T-junctions and convexity lead to a system which only relies on low level depth cues and does not involve any learning process. However, it shows a similar performance with the state of the art.
SubjectsImage processing -- Digital techniques, Imatges -- Processament -- Tècniques digitals
URIhttp://hdl.handle.net/2099.1/12572
Collections
Share: