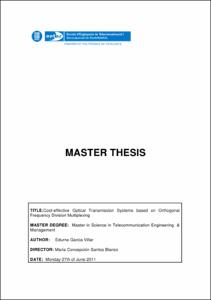 Except where otherwise noted, content on this work is licensed under a Creative Commons license : Attribution-NonCommercial-ShareAlike 3.0 Spain
Abstract
Orthogonal frequency division multiplexing (OFDM)is becoming increasingly popular in optical fiber applications because as data rates increase, the computational requirements involved in electronic dispersion compensation for serial modulation formats become impractical. Some investigations explain that OFDM can be used for the electronic compensation of chromatic dispersion and polarization mode dispersion in single-mode optical fiber systems and for mode dispersion in multimode systems. The main goal of this Master thesis is to study on one hand the OFDM systems and on the other, the optical transmission systems and also the combination of the two: optical OFDM systems. A general classification of the present proposals for optical OFDM implementations is presented and two of the identified schemes, those which lead to more cost-effective solutions, have been studied in deeper detail. These are based on conventional Intensity Modulation and Direct Detection (IM/DD) optical transmission systems. The first system relies on a RF up-conversion stage prior to the optical intensity modulation that allows to modulate the real and imaginary parts of the optical OFDM signal into the phase and quadrature components of an RF frequency, while the second involves imposing the Hermitian symmetry among the subcarriers in order to obtain an OFDM signal which is purely real. Starting from a built in demo of the software called Virtual Photonics Inc. (VPI) a practical investigation about OFDM optical systems has been done. This demo is called Long Haul transmission and implements the RF up-conversion optical OFDM scheme. This demo is only an example restricted to a specific scenario and offers little flexibility. That is why a new VPI simulation setup has been created by exploiting the Matlab interface provided by VPI where the OFDM coding and decoding have been developed in Matlab code and can be adjusted and modified to any scenario. Additionally, another VPI simulation setup has been developed which allows to impose the Hermitian symmetry among the subcarriers allowing for the obtention of a purely real OFDM signal to be directly Intensity modulated over an optical carrier. Results and comparisons of the outcome of both, our simulation setups and the VPI demo, are presented showing good agreement. Moreover, our setups have incorporated several improvements based on the investigation of optical OFDM systems carried out. Also, the functionalities of the software have been exploited to come out with user-friendly setups that allow any researcher in the field to carry out advanced simulations with little effort.
SubjectsOptical communications, Orthogonal frequency division multiplexing, Comunicacions òptiques, Comunicació sense fil, Sistemes de
URIhttp://hdl.handle.net/2099.1/12555
Collections
Share: