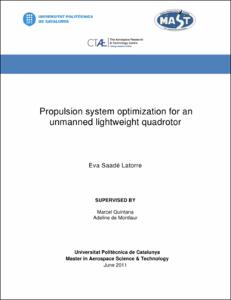 This thesis presents an approach for the optimization of the propulsion system of an unmanned lightweight quadrotor by introducing rotor aerodynamics and identifying methods to improve the electrical propulsion system (EPS), hence improving its performance and efficiency. Since the rotor is the main component to generate thrust, a numerical model based on the combined momentum and blade element theory is presented to aid in the design and/or selection of the optimum rotor. In order to validate this numerical model and to benchmark the different system solutions, a propulsion test bench was built to collect experimental data from a series of tests carried out in the lab. Rotors of 11 and 13 inches of diameter and of different brands were tested under the same environmental conditions with rotational velocities ranging from 4000 to 8000 rpm in hover situation. The measured thrust and power were compared to the theoretical thrust output and required power, and the average discrepancy between both results was estimated to be 4.6% in terms of thrust and to 24.3% in terms of power. The design and optimization of the EPS is an iterative procedure; consequently, an optimization workflow method is proposed, since propulsion improvements mainly depend on the optimum combination of the propeller, motor and battery.

The aim of this project is to conduct an investigation of current quadrotor's propulsion systems and suggest methods to improve them. These rotorcrafts are found in our modern everyday use such as in traffic control, agriculture surveying and forest fire detection. Some advantages with respect to other Vertical Take Off and Landing (VTOL) UAVs are noticed in quadrotors in terms of the suitability for indoor/outdoor or urban applications, their agile maneuverability and their control simplicity since they do not require mechanical linkages to vary the rotor's blade pitch angle. However, these machines are still within the Edison level in terms of propulsion efficiency and hence offer possibilities for some improvements. The master thesis will include a general introduction to small quadrotors and an analysis of their use, followed by a literature review and a historical background while considering state of the art of small quadrotors built so far. Design and testing analysis will be gathered with the experience that I gained during my internship at CTAE, Aerospace Research & Technology Centre, where these issues are being worked on, with the aim of reaching an operational prototype. An extensive discussion about rotor selection considerations as well as the motor-battery-propeller combination will be reported as a vital part covered during my internship. Propulsion tests will be performed in CTAE's Lab including testing apparatus and test bench set-up description in details. Tests' procedures coupled with their results and data analysis for each test will also be discussed thoroughly. In order to meet the objectives described above a numerical analysis based on blade element and momentum theories will be set up for batch analysis. The numerical results will be compared with text book data along with experimental results conducted in the laboratory, where different propellers will be tested for thrust generation, taking into consideration the divergence in results that might be generated from the quality of the airfoil data. The objective of this numerical analysis is to propose design guidelines leading to better rotor efficiency by using mathematical calculations. Another key point to enhance the propulsion system will be to find the best battery-motor-gearing combination for the selected propeller for efficient thrust production.
SubjectsDrone aircraft, Propulsion systems, Avions no tripulats, Avions de reacció
URIhttp://hdl.handle.net/2099.1/12472