Coastal wave storms: Observations and simulations in the NW Mediterranean 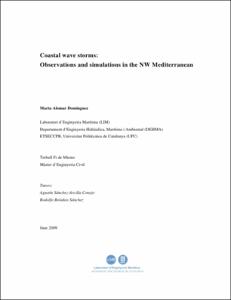 ; Bolaños Sánchez, Rodolfo
Document typeMaster thesis
Rights accessOpen Access
Abstract
The importance of improving wind-wave predictions for the NW Mediterranean coastal region makes it necessary to perform a study in-depth of wave generation and propagation mechanisms under sharp spatial and temporal gradients. For this purpose, a heavily instrumented coastal transect was set perpendicular to Tarragona’s harbour coastline. Wave data were obtained from different buoys and meteorological stations. Wave data were analysed paying special attention to storm identification and storm evolution in terms of the integrated spectral parameters and the spectral shape. Measured data were also used to analyse the performance of the operational 18km resolution WAM wave model, and a higher resolution SWAN wave model forced with different wind fields (modelled and observed). The in-situ observations reproduced the expected features of wave generation and propagation: wave height and peak period increased with fetch during fetch-limited growth conditions and peak period was conserved in fully-developed sea conditions. Spectral shapes agreed with previous observations in both fetch-limited and fully-developed growth conditions. The differences between the time series recorded at each instrument confirm the importance of strong temporal and spatial gradients in the regional wind and wave fields. Due to the coarse temporal and spatial resolution of the operational wind and wave models, the wave model did not predict specific features of the time series such as storm peaks and calm periods, sudden changes in wave direction, and differences between instruments. Also, the operational wave model did not accurately predict the integrated spectral wave parameters: wave height was up to -50% under-predicted at the peak of the storm, low peak periods (<7.5s) were over-predicted and high peak periods (>7.5s) were under-predicted. To improve these results a high resolution wind model (4km, 3h) was used to force a high resolution wave model (1km, 1h) during one particular storm event. Increasing the resolution of the wind and wave models, the peaks of the storm were predicted and wave height estimations were significantly improved in terms of magnitude (wave height underprediction at the peak of the storm was reduced from -50% in the operational model to -17%). Some of the differences between the instruments’ time series were reproduced but not all of them. Wave height and peak period were still significantly under-predicted. Because wind speeds were over-predicted (25%), these results point to a need of improving wave predictions in terms of wave growth. For this reason, a study of the sensitivity of the wave model to different wind input fields was performed. It was concluded that modelled wind fields were better input than in-situ wind observations because of the lack of spatial variability of the observations. Also, because the observations do not represent the highest wind speeds along the fetch of the buoys. When increasing the wind (taking the highest values in the region or enhancing the predicted wind fields) better predictions of the magnitude of the wave height were obtained, although the improvements of the peak period were not conclusive. The results suggest that the reason of the under-rediction of the high-resolution models was an inaccurate transmission of energy from the winds towards the waves. The role of the drag coefficient and bimodal spectra were also considered, but its study in detail will be approached in future work. The overall results point to the need of better understanding the local wave generation and growth processes to eventually improve wave predictions in the area.
SubjectsOcean waves, Coastal engineering, Storms, Onades, Enginyeria de costes, Tempestes
URIhttp://hdl.handle.net/2099.1/12402
Collections
Share: