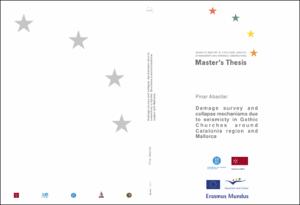 Except where otherwise noted, content on this work is licensed under a Creative Commons license : Attribution-NonCommercial-NoDerivs 3.0 Spain
Abstract
The impacts of the seismic actions in historical centres have started to be an important concern in the last decades especially following the devastating earthquakes caused damage on the cultural heritage around Europe (mainly in seismic regions like Italy, Greece and so on). These recent events which caused great amount of human, cultural heritage and economic losses made researchers pay more attention on the results of these seismic actions and how to prevent these types of damage. Analyzing the behaviour of how these phenomena occurs can answer the questions on how the damage could be prevented. These ideas made contributions on invention of the collapse mechanisms improved especially during the last decades. By the improvement of these collapse mechanisms and systemizing the possible failure types in abacuses regarding the seismic actions, it became possible to understand the real behaviour of the structures. This knowledge helps during construction processes of the structures and guides in defining the maintenance and intervention techniques along the whole life of the structure. Although Catalonia region is not among the high seismic zones in Europe, there have been frequent earthquakes which sometimes made damage resulting with deaths and heavy decays on the structures. Analyzing the effects of these seismic actions which mainly focus on the period of the 14th century is very important in terms of defining the possible risks of these structures and avoiding further decay. Considering these aspects, the study consists of the case studies around Catalonia region with the same type of typology. The case studies generally have similar construction dates and they are major samples of their periods. The framework of the study does not only consist of analyzing the damage due to seismic actions but the whole structural problems of these cases in order to understand what further damage can occur in case of a future earthquake. By defining the damage that the structures already have, the correlation between this damage and the possible failure mechanisms regarding future possible seismic actions were set. Cathedral of Barcelona, Santa Maria Del Mar, Santa Maria Del Pi, Cathedral of Mallorca and Cathedral of Girona were evaluated in the framework of this study. After defining the general characteristics and analyzing the damage the structures has, the possible collapse mechanisms were improved with the relation of these types of mentioned damage. As a result of the expected failure mechanisms, some interventions techniques and recommendations regarding the improvement of this study in the future were highlighted. The importance of the historical structures is not a questionable and the seismic actions play an important role in their decay. Since the impacts of these disasters are irreversible, it is inevitable to have proper knowledge on the possible results in order to avoid losing this cultural heritage on which all people have responsibilities.
SubjectsEarthquake damage -- Prevention, Architecture, Gothic -- Conservation and restoration, Seismology -- Mallorca, Seismology -- Catalunya, Terratrèmols -- Danys -- Prevenció, Arquitectura gòtica -- Conservació i restauració, Sismologia -- Mallorca, Sismologia -- Catalunya
URIhttp://hdl.handle.net/2099.1/12299
Collections
Share: