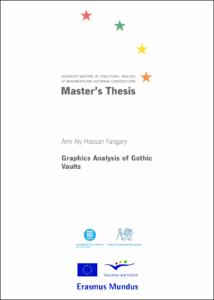 The gothic architecture owes its splendor to two main structural elements; the pointed arch and the vault. However, the Gothic vault itself is a repetition of several pointed arches to create an amazing system for covering the underneath compartment. This vault was subjected to a long debate regarding its structural behavior and the way it keeps its equilibrium and transmits its thrusts. Also, the rib of the gothic vault imposed many question whatever it had a decorative, structural or constructional role. Different theories were developed but none was analytically confirmed. The aim of this study is not to find answers to the debates, but mainly to develop a practical technique of analyzing the ribbed cross vault following the theories previously developed by the researchers, to compare the results and to rationalize them. Mainly, to undertake a task, that till now, was never accomplished. And to provide a model that can be followed for the analysis of any gothic vault. In order to achieve this task, a general historical and architectural study was carried out regarding the vaults, then the theories of the structural behavior were studied and later the different methods of the structural analysis of the vault were recognized and explained prior to the conducted analysis. Two case studies of Catalan Gothic vaults; the main vault of the cathedral of Santa Maria del Pi and the main vault of the cathedral of Santa Maria del Mar, were chosen to be analysed following the graphical (line of thrust) limit analysis method. Both vaults were discretisized in a geometrical model and different slices were taken for each vault following the main theories of decomposition of the vaults. Then, the defined arches were analysed using a spreadsheet and for each arch the line of thrust was graphically plotted and analysed. The obtained results were various and quite interesting. For most of the analysed arches, it was not possible to find a line of thrust within the stone voussoirs region and the line was passing either to the sound or light infill layers. It was not possible to find a realistic line of thrust for the cross ribs arches when the loads of the webs and the upper infill were applied to them. Also, the minimum and maximum values of the lateral thrusts for the arches were almost the same. Many conclusions can be derived from this study, regarding the form and geometry of the gothic vaults, the graphical analysis method and the behavior of the vaults. However, the most important is the role of the infill layers in the equilibrium of the vault and the transmission of the lateral thrusts. Also, the cross ribs mostly don‘t have a structural role. Also, the construction of this type of thin vaults required a high level of knowledge and expertise in stabilizing and keeping in the structure equilibrium.
SubjectsVaults (Architecture), Structural analysis (Engineering), Structures, Architecture, Gothic -- Conservation and restoration, Voltes (Arquitectura), Estructures, Teoria de les, Càlcul de tensions (Estructures), Arquitectura gòtica -- Conservació i restauració
URIhttp://hdl.handle.net/2099.1/12298