Twin Storm Events: A probability analysis and risk evaluation of twin storm occurrences along the coast of Catalonia 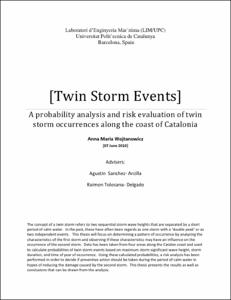 ; Tolosana Delgado, Raimon
Document typeMaster thesis
Rights accessOpen Access
Abstract
The concept of a twin storm refers to two sequential storm wave heights that are separated by a short period of calm water. In the past, these have often been regards as one storm with a ‘double peak’ or as two independent events. This thesis will focus on determining a pattern of occurrence by analyzing the characteristics of the first storm and observing if these characteristics may have an influence on the occurrence of the second storm. Data has been taken from four areas along the Catalan coast and used to calculate probabilities of twin storm events based on maximum storm significant wave height, storm duration, and time of year of occurrence. Using these calculated probabilities, a risk analysis has been performed in order to decide if preventive action should be taken during the period of calm water in hopes of reducing the damage caused by the second storm. This thesis presents the results as well as conclusions that can be drawn from the analysis.
SubjectsCoastal engineering, Costs, Storms, Ocean waves, Enginyeria de costes, Costes -- Catalunya, Tempestes, Onades
DegreeMÀSTER UNIVERSITARI ERASMUS MUNDUS EN ENGINYERIA I GESTIÓ COSTANERA I MARÍTIMA (Pla 2013)
URIhttp://hdl.handle.net/2099.1/12292
Collections
Share: