Analysys of hydrodinamic transformation around a Low crested permeable structure 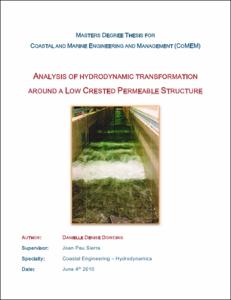 Document typeMaster thesis
Rights accessOpen Access
Abstract
The aim of this research project was to increase the knowledge about the hydrodynamic processes that take place around a permeable Low-Crested Structure (LCS) when this structure is under wave attack. Further, the intention is to place the hydrodynamic data garnered here within the context of the current state of scientific research related to permeable LCS so as to build on previous literature and works associated to the hydrodynamics of LCS. In order to carry out the research, physical modelling experiments were conducted in the wave flume at the Laboratori d'Enginyeria Marítima (LIM). These experiments were sponsored by the larger research project of related to Composite Modelling of the Interactions Between Beaches and Structures (CoMIBBS). It is hoped that the work here will be able to contribute in some way to the goals of the larger CoMIBBS project. It was indispensable to conduct the experiments related to permeable LCS making use of various wave attack scenarios including varied wave heights and wave slopes. Two types of structures were tested in these experiments, emerged and submerged. All of the information about the research project and the facility specifics, as well as the structure details, the wave scenarios, the recorder locations and data collection methods are detailed within Chapter 2. The results acquired from the experiments conducted were analysed in terms of the following aspects: • wave transmission characteristics • wave reflection characteristics • spectral changes • current velocities – magnitude variation and vertical distribution Trend analysis revealed aspects of the hydrodynamics which were considered more significant than others; it also aided in distinguishing the effects of certain parameters on other data. The results garnered were compared to existing formulas and categorizations relating to the hydrodynamic indicators considered paramount, which were (1) the transmission coefficient, (2) the reflection coefficient, and (3) the spectral energy distribution. The relationships between the results of the physical modelling and the calculated results of the formulas were established and examined for connective trends. This process ascertained the relevance of the formulas to the LCS under examination and the hydrodynamic patterns noted. 3 Another part of the thesis was to numerically simulate the water movement through the permeable LCS. This was done with the use of the LIMWAVE model developed at the Universitat Politècnica de Catalunya (UPC). With this model, it was attempted to determine the correlation between the physical modelling results and numerical modelling results. From these simulations, it was noted that the numerical model represented the water level on the leeside of the structure fairly well, save for slight differences resulting from the piling up effect. The relation between the models of the water level on the seaward side of the structure was dependent on whether or not reflection was activated, in which case, a standing wave was produced. The most important conclusions found from the works are as follows: 1. The coefficients Kt and Kr as well as the shape of the frequency spectra are linked to the wave steepness, which seems to be a very important yet often underestimated parameter. 2. The inclusion of the structure’s permeability into the existing formulae for the prediction of the coefficients Kt and Kr will greatly increase the accuracy of the formula. This work has opened up many more aspects of the application of hydrodynamic observation and modelling. A set of research exercises should be carried out in order to complement this report and relate the findings in more practical applications. Additional tests related to highly permeable low-crested structures both as offshore breakwaters and as submerged offshore reefs are required to gain a better understanding of the effect of permeability on the transmission and reflection of waves. Further, these tests should be conducted on selected sites in order to truly understand the effects of permeable LCS in the field. From these test results it is recommended that a review of the existing formulas for the transmission coefficients should be made to include the permeability of the structures. Also, an attempt should be made to examine in detail the relationship between the wave steepness and the various parameters under examination. The results of these findings can have several practical applications: the design of an improved structure with less scouring which is more environmentally friendly, as well as the probably use of wave energy as a power source.
SubjectsCoastal engineering, Hydrodynamics, Enginyeria de costes, Hidrodinàmica
DegreeMÀSTER UNIVERSITARI ERASMUS MUNDUS EN ENGINYERIA I GESTIÓ COSTANERA I MARÍTIMA (Pla 2013)
URIhttp://hdl.handle.net/2099.1/12288
Collections
Share: