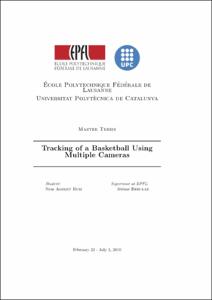 This master thesis presents a method for tracking a basketball during a basketball match recorded with a multi-camera system. We first developed methods to detect a ball in images based on its appearance. Color was used through a color histogram of the ball, manually initialized with ball samples. Then the shape of the ball was used in two different ways: by analyzing the circularity of the ball contour and by using the Hough transform to find circles in the image. In a second step, we attempted to track the ball in three dimensions using the cameras calibration, as well as the image methods previously developed. Using a recursive tracking procedure, we define a 3-dimensional search volume around the previously known position of the ball and evaluate the presence of a ball in all candidate positions inside this volume. This is performed by projecting the candidate positions in all camera views and checking the ball presence using color and shape cues. Extrapolating the future position of the ball based on its movements in the past frames was also tested to make our method more robust to motion blur and occlusions. Evaluation of the proposed algorithm has been done on a set of synchronized multi-camera sequences. The results have shown that the algorithm can track the ball and find its 3D position during several consecutive frames.