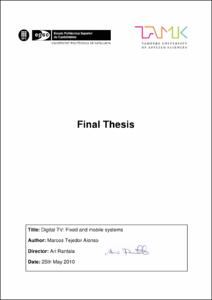 Document typeBachelor thesis
Rights accessOpen Access
Abstract
The Digital TV is already a part of our daily lives. There are different systems that make possible to bring it to our homes. These systems were developing by the DVB-Project Group. The most important are DVB-T (terrestrial), DVB-C (cable) and DVB-S (satellite). Even so and due to the changing needs of users in the field of communications and entertainment, there are new challenges that the currents standards are not able to satisfy. Therefore becomes necessary to revise the current standards of DVB. One of these new necessities are the mobile entertainment. The large increase in mobile phones and hand-held terminals in the society and the improvements in content distribution raised the need to bring it to these devices. As a result was created the DVB-H, a standard that allows you to download content for mobile devices, allowing greater mobility and a battery saving 90% if compared with its counterpart in DVB-T. DVB-H is a standard that makes it possible to deliver live broadcast television to hand-held terminals. It is developed from the DVB-T standard, which makes it possible to send DVB-H signals in the DVB-H/T frequency band 470-862 MHz. This allows the benefit to reuse the DVB-T transmission equipment. Although this one, there are some differences between DVB-H and DVB-T as some process that are added to improve the features for a mobile terminal in the DVB-H standard. The most important additions are the time slicing, in order to reduce the average power consumption and MPE-FEC for improving Doppler performance and tolerance against interference.
SubjectsDigital television, Digital Video Broadcasting (Project), Televisió digital
URIhttp://hdl.handle.net/2099.1/11347
Collections
Share: