Inferring Best Strategies from the Aggregation of Information from Multiple Agents: The Cultural Approach 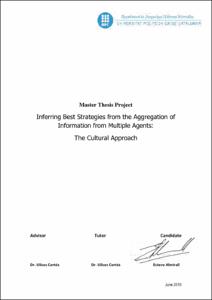 Document typeMaster thesis
Rights accessOpen Access
Abstract
Although learning in MAS is described as a collective experience, most of the times its modeling draws solely or mostly on the results of the interaction between the agents. This abruptly contrasts with our everyday experience where learning relies, to a great extent, on a large stock of already codified knowledge rather than on the direct interaction among the agents. If in the course human history this reliance on already codified knowledge had a significant importance, especially since the discovery of writing, during the last decade the size and availability of this stock has increased notably because of the Internet. Even more, humanity has endowed itself with institutions and organizations devoted to fulfill the role of codifying, preserving and diffusing knowledge since its early days. Cultural Algorithms are one of the few cases where the modeling of this process, although in a limited way, has been attempted. However, even in this case, the modeling lacks some of the characteristics that have made it so successful in human populations, notably its frugality in learning only from a rather small subset of the population and a discussion of its dynamics in terms of hypothesis generation and falsification and the relationship between adaptation and discovery. A deep understanding of this process of collective learning, in all its aspects of generalization and re-adoption of this collective and distilled knowledge, together with its diffusion is a key element to understand how human communities function and how a mixed community of humans and electronic agents could effectively learn. And this is more important now than ever because this process has become not only global and available to large populations but also has largely increased its speed. This research aims to contribute to cover this gap, elucidating on the frugality of the mechanism while mapping it in a framework characterized by a variable level of complexity of knowledge. Also seeks to understand the macro dynamics resulting from the micro mechanisms and strategies chosen by the agents. Nevertheless, as any exercise based on modeling, it portrays a stylized description of reality that misses important points and significant aspects of the real behavior. In this case, while we will focus on individual learning and on the process of generalization and ulterior re-use of these generalizations, learning from other agents is notably absent. We believe however, that this choice contributes to make our model easier to understand and easier to expose the causality relationships emerging from our simulation exercises without sacrificing any significant result.
SubjectsMulti-Agent systems, Sistemes multiagent (Informàtica)
DegreeMÀSTER UNIVERSITARI EN INTEL·LIGÈNCIA ARTIFICIAL (Pla 2009)
URIhttp://hdl.handle.net/2099.1/11319
Collections
Share: