Study of modularity in images 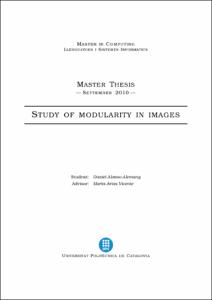 Document typeMaster thesis
Rights accessOpen Access
Abstract
Modularity is an important concept in Biology, among other areas. In script complexity, there are some theories stating that the symbols of a writing system are built from smaller, common components, that could be thought of as modules. We introduce a representation of black and white images as sequences of symbols, which allows us to apply sequence based motif finding techniques on images. We present a modification of the algorithm in [27] to search for motifs in a variable number of sequences, instead of in a fixed number, while guaranteeing the same properties about the statistical significance of the found motifs of the original paper. Finally, we apply the proposed algorithm to sequences describing images of latin letters.
SubjectsComputer graphics, Biology -- Data processing, Infografia, Biologia -- Informàtica
DegreeMÀSTER UNIVERSITARI EN COMPUTACIÓ (Pla 2006)
URIhttp://hdl.handle.net/2099.1/11307
Collections
Share: