Optimization of stiffness and dampipng properties of below-knee prosthesis 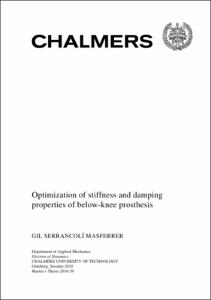 Nowadays, prosthetic manufacturers have developed new designs of below-knee prosthesis which are anthropomorphic and safe. But more research should be done. This project tries to find out optimized parameters of below-knee prosthesis to walk with as low energy as possible. A biomechanical optimal problem is formulated to find out suitable stiffness and damping properties of below-knee prosthesis. These properties mean the relation between the torque on the ankle joint of the prosthetic leg with ankle angle and its velocity. The criterion used has been minimizing energy of both on the healthy part of the body as well as external energy with which the prosthesis battery is supplied. In order to state the optimal problem, firstly an anthropomorphic human gait has been looked for by using computer simulations. It has been chosen a mechanical human model that consist of two legs (with thigh and shank), the trunk and with joints: at ankle, knee and hip. Foot has been modeled as footprint. The system has 7 degrees of freedom. The motion has been parameterized by using polynomial and Fourier series and their parameters have been chosen so that the motion was anthropomorphic. Control torques at joints and ground reaction forces have been determined by using Lagrange equations. After that, the optimization problem has been considered using energy of the healthy part of the body as cost function, while energy consumed by the prosthesis has been calculated in each variance. Algorithm of solution of optimization problem has been implemented in MATLAB so that optimized kinematic parameters of the gait as well as stiffness and damping parameters of the below-knee prosthesis are determined automatically. fmincon function is used to solve the optimal problem and ode45 function to solve the differential equation to find out kinematics of the trunk. The analyses of the obtained optimized values of stiffness and damping parameters of a below-knee prosthesis as well as kinematics of the optimized gait are presented. Future work within the project topic is outlined.
SubjectsArtificial knee -- Mètodes de simulació, Biomechanics, Mathematical optimization, Genolls -- Pròtesis -- Mètodes de simulació, Biomecànica, Optimització matemàtica
ProvenanceAquest document conté originàriament altre material i/o programari no inclòs en aquest lloc web
URIhttp://hdl.handle.net/2099.1/11245