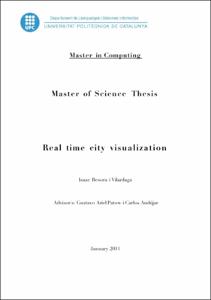 Document typeMaster thesis
Rights accessOpen Access
Abstract
The visualization of cities in real time has a lot of potential applications, from urban and emergency planning, to driving simulators and entertainment. The massive amount of data and the computational requirements needed to render an entire city in detail are the reason why a lot of techniques have been proposed in this eld. Procedural city generation, building simpli cation and visibility processing are some of the approaches used to solve a small subset of the problems that these applications need to face. Our work proposes a new city rendering algorithm that is a radically di erent approach to what has been done before in this eld. The proposed technique is based on a structuration of the city data in a regular grid which is traversed, at runtime, by a ray tracing algorithm that keeps track of visible parts of the scene. As a preprocess, a set of quads de ning the buildings of a city is transformed to the regular grid used by our algorithm. The rendering algorithm uses this data to generate a real time representation of the city minimizing the overdraw, a common problem in other techniques. This is done by means of a geometry shader to generate only the minimum number of fragments needed to render the city from a given position.
SubjectsInformation display systems, City planning, Real-time data processing, Visualització (Informàtica), Urbanisme, Temps real (Informàtica)
URIhttp://hdl.handle.net/2099.1/11156
Collections
Share: