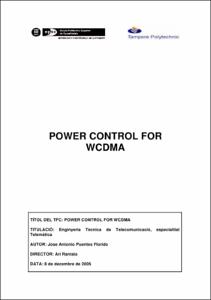 This project tries to introduce itself in the physical implementations that make possible the denominated third generation mobile technology. As well as to know the technology kind that makes possible, for example, a video-call in real time. During this project, the different phases passed from the election of WCDMA like the access method for UMTS will appear. Its coexistence with previous network GSM will be analyzed, where the compatibility between systems has been one of the most important aspects in the development of WCDMA, the involved standardization organisms in the process, as well as the different protocols that make the mobile communications within a network UTRAN possible. Special emphasis during the study of the great contribution that has offered WCDMA with respect to the control of power of the existing signals will be made. The future lines that are considered in the present, and other comment that already are in their last phase of development in the field of the mobile technology. UMTS through WCDMA can be summarized like a revolution of the air interface accompanied by a revolution in the network of their architecture.
SubjectsUniversal Mobile Telecommunications System, Code division multiple access, Wireless communication systems, WCDMA (Telecomunicació), Comunicacions mòbils, Sistemes de, Comunicació sense fil, Sistemes de
URIhttp://hdl.handle.net/2099.1/11015