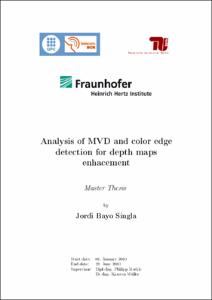 MVD (Multiview Video plus Depth) data consists of two components: color video and depth maps sequences. Depth maps represent the spatial arrangement (or three dimensional geometry) of the scene. The MVD representation is used for rendering virtual views in FVV (Free Viewpoint Video) and for 3DTV (3-dimensional TeleVision) applications. Distortions of the silhouettes of objects in the depth maps are a problem when rendering a stereo video pair. This Master thesis presents a system to improve the depth component of MVD . For this purpose, it introduces a new method called correlation histograms for analyzing the two components of depth-enhanced 3D video representations with special emphasis on the improved depth component. This document gives a description of this new method and presents an analysis of six di erent MVD data sets with di erent features. Moreover, a modular and exible system for improving depth maps is introduced. The idea behind is to use the color video component for extracting edges of the scene and to re-shape the depth component according to the edge information. The mentioned system basically describes a framework. Hence, it is capable to admit changes on speci c tasks if the concrete target is respected. After the improvement process, the MVD data is analyzed again via correlation histograms in order to obtain characteristics of the depth improvement. The achieved results show that correlation histograms are a good method for analyzing the impact of processing MVD data. It is also con rmed that the presented system is modular and exible, as it works with three di erent degrees of change, introducing modi cations in depth maps, according to the input characteristics. Hence, this system can be used as a framework for depth map improvement. The results show that contours with 1-pixel width jittering in depth maps have been correctly re-shaped. Additionally, constant background and foreground areas of depth maps have also been improved according to the degree of change, attaining better results in terms of temporal consistency. However, future work can focus on unresolved problems, such as jittering with more than one pixel width or by making the system more dynamic.