Comparison of methods for the number recognition of sport players 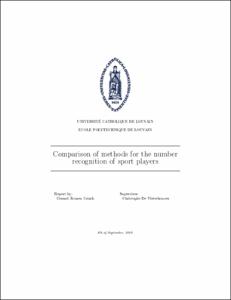 Except where otherwise noted, content on this work is licensed under a Creative Commons license : Attribution-NonCommercial-NoDerivs 3.0 Spain
Abstract
In a system of detection and recognition of players on a sport- el, the process of identifying numbers from a binary image is the last step. The identi cation is possible using the numbers of players jerseys that are obtained from images captured by a distributed set of cameras. The main problem to solve is that these pictures have di erent sizes and su er rotations and non-rigid deformations. Prior to this project were independently studied three methods to recognize numbers from the players jerseys. The good results obtained encouraged to use any of these methods in the system of recognition of athletes. The provided methods to obtain the image features are based on matching pursuit, local binary pattern and optical character recognition algorithms. The main objective of this project is justify which is the most appropriate method. But the fact that previous studies were independents involve that can not be made a direct comparison of their results. Therefore is necessary a fair comparison with common criteria. Get this fair comparison is result of working in an homogenous environment. This implies that all the methods have been tested with a set of common images and a common classi er, based on support vector machine. It has been trained with a set of pictures of a basketball match. The criteria taken into account have been the accuracy in the identi cation, obtained with the 10-fold cross-validacion, and the time needed by each method to identify a number. Once done the study, it has been concluded that the method that works with the optical character recognition is the most accurate and fastest. Although this method is the most susceptible to the rotation of images, so its need a normalization, clearly is the most e cient as for the identi cation of digits as to detect a false identi cation. The fact that the di erences between the three methods results are so wide, leads to be sure of the choice made. So clearly has been chosen the most e cient method to be used in the project, still in development, that detects, recognizes and tracks players on a sport- eld.
Description
Projecte final de carrera fet en col.laboració amb Université Catholique de Louvain. Ecole Polytechnique de Louvain.
SubjectsPattern recognition systems, Reconeixement de formes (Informàtica)
DegreeENGINYERIA DE TELECOMUNICACIÓ (Pla 1992)
URIhttp://hdl.handle.net/2099.1/10960
Collections
Share: