Can nature help in the routing problem? 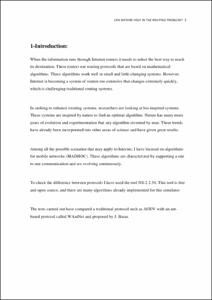 To communicate through Internet, we need some intermediate nodes to route information from one extreme to another. These nodes use a routing protocol based on algorithms. Today there are multitude of routing protocols that work quite well in large networks without much changes. Internet is becoming a site with an increasing number of heterogenic changes. We need a protocol to meet these needs. The idea is to develop algorithms based on swarm intelligence. There are several studies about trying to emulate the animal swarms. This algorithms use cooperating individuals through self-organization (with no central control which operates on the swarm members).For this scenario I have ruled out the bees based algorithms that are designed to operate in three dimensions, and I have focused on algorithms based on Ant Colony Optimization (ACO). To reach a conclusion on the effectiveness of these new algorithms, I have relied on a protocol version by J. NetAnts Baras and I have compared it with a traditional protocol such as Ad hoc On-Demand Distance Vector (AODV). To make the implementation and the comparison between the protocols I have used the network simulator NS-2 version 2.34 running under Linux. These two protocols have been tested in very different scenarios to see the limitations of each algorithm and to see which one suits better in each scenario. After the simulations we can conclude that the algorithm NetAnt is not optimal as AODV to operate in Ad-hoc networks. The limitations would be given by the high number of packages that need to be sent to build a path. These packets are sent proactively to all nodes causing congestion and filling the buffers of the nodes. Loops have also been observed to fail to find the correct route. Therefore, the algorithm NetAnt works but is not the most optimal for Ad-hoc networks
SubjectsComputer network protocols., Routers (Computer networks), Protocols de xarxes d'ordinadors, Encaminadors (Xarxes d'ordinadors)
URIhttp://hdl.handle.net/2099.1/10809