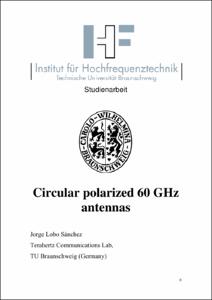 Document typeBachelor thesis
Rights accessOpen Access
Description
Many multimedia applications for high speed data wireless transmissions (around Gb/s or multi-Gb/s) are used in indoor systems (<10m). Some examples of them are the Ethernet Gigabit (1.25 Gb/s), the wireless high-speed download and the wireless transfer of high-definition video (2-20Gb/s). These high transmission rates cannot be implemented in the traditional frequency bands dedicated for the typical wireless systems, since they obtain an important degradation of service and the bandwidth is not enough for the data rate. For this reason, the Federal Communications Commission (FCC) has introduced recently 7 GHz of bandwidth, without license, in the band of 60 GHz. It is mainly due to the appearance of the atmospheric attenuation (10 to 15 dB/Km), since the presence of the oxygen affects in a bandwidth of 8 GHz (approximately) over the 60 GHz band; So the band of 60 GHz is not suitable for long distances (more than 2 Km). However, it is possible to dedicate completely in indoor wireless applications (<50m), where the atmospheric attenuation does not have any significant impact. This high bandwidth allows high speeds of data transmission and a new range of ultrahigh rates of the wireless communications systems. In consequence, the wireless highdefinition multimedia interface (wHDMI) and "Kiosk-downloading" are some applications with a high volume of information. It is important to highlight that wHDMI will offer an important improvement in the WLAN incorporated in the systems of portable computer (laptops, PDAs, etc ...). On the other hand, " Kiosk-downloading " is a possible solution to transfer, in a short time, DVD's movies from a server (kiosk) to a portable device such as iPods or PDAs. For example, the download of 120 minutes of a DVD would take 10 minutes with a rate of 54 Mb / s, whereas with this new technology would only take 13 seconds for a 2 Gb / s rate, and for 6 Gb / s rate it would only takes 4 seconds. In spite of the quantity of publications and the interest related to the 60 GHz band, it is possible to observe that the data rates of WLAN and WPAN increase periodically. For example, in 1999 the standard 802.11.b was allowing a maximum speed of 11Mb/s and in 2007 the rate was coming until 300Mb/s through the support to the project 802.11.n. Therefore, in 2011 it is possible to anticipate that a rate of a few Gb/s will be offered. Therefore, in order to satisfy the increasing demand of bandwidth, many enterprises and research institutions are investigating in new technologies to solve or at least to cover it temporally. For example, in March, 2005, the Group of Tasks 3C (TG3c) in IEEE802.15 was formed to coordinate the normalization of the 60 GHz band [12]. In order to contribute something to this investigation topic, this project is dedicated to the study of different antennas capable of working at the 60 GHz band and with the addition value of being circular polarized.
SubjectsBroadband communication systems, Telecomunicació de banda ampla, Sistemes de
DegreeENGINYERIA TÈCNICA DE TELECOMUNICACIÓ, ESPECIALITAT EN SISTEMES DE TELECOMUNICACIÓ (Pla 2000)
URIhttp://hdl.handle.net/2099.1/10494
Collections
Share: