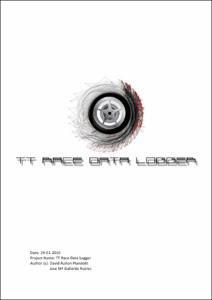 Show full item record
Auñon Plandolit, David
Gallardo Robles, Jose Maria
Tutor / directorVan Westen, Marien
CovenanteeHanzehogeschool Groningen
Document typeMaster thesis (pre-Bologna period)
Rights accessOpen Access
Abstract
This report is made to accomplish the demand from TriCAT Racing motor race team. They suggest if it was possible to create a device capable to log data from a motorbike during a race or testing seasons, mentioning some other similar systems out on the market, but is really expensive. Taking an initial idea, we thought about one way to design a system capable of satisfy the demand of our contractor, trying to reduce costs on the design. At this point we accept the project offered by TriCAT racing team. Known the several issues that they have about the design and studying the different ways to make it, the design is starting to be thought. The contractor needs that the system has to be capable of store the data into a SD card, this data are: position, velocity, RPM, cornering angle and lap time of a motorbike in a circuit race. For solve this issues we thought about microprocessors, GPS’s, and other kind of possibilities, arriving to one possible solution. Now the solution of design question is solved, it is possible to design a system capable to accomplish the demands of the contractor, with a microcontroller PIC18F4550 and a GPS Unit, one Accelerometer, and programming a complex program on C for microcontrollers it is possible arrive to a solution. When we start to build the first prototype and we decide to test it a problem appears, not enough space in ROM memory. During the implementation part, we arrived the conclusion that we made an error choosing the microprocessor PIC18F4550, this error is because the ROM memory. The program that we are using is too big, and the ROM memory of the microprocessor PIC18F4550 it’s not enough to contain all the program. As a result of the short time disposed for make the project, and the errors made at the end, it is not possible to change the design, the prototype is build and we are trying to make it run. If the project could be continued for another students or another engineers, the best idea for start, is change the microcontroller for another with the minimum resources needed by the C program.
SubjectsTourist Trophy (Automobile race)
URIhttp://hdl.handle.net/2099.1/10091
Collections
Share: